Male Entitlement Vs The Witch

One of the things that attracted me to witchcraft was the empowerment I felt as a woman.  Unlike the major religions which are almost all male-centric, through witchcraft I was encouraged to stop trying to be as good as a man or act like a man, and instead be as good as a woman and accept that women approach things - from relationships to business - differently.

I was brought up a feminist; my dad had (has?) more traditional views and I think that was one of the reasons we clashed so much growing up.  From childhood I was taught to modify my behaviour to appease men and the patriarchal system: don't go out alone after dark; never accept lifts off strangers; watch your drink when in a bar; be attractive and available but don't look like a slut.  The bottom line is men have been taught they are allowed to do whatever they want to me, from wolf-whistling or demanding I smile to acts of violence, and women are taught it's our fault and in most cases we should be grateful for the attention.

The 21st century has not brought a change in attitudes, but it has changed the playing field.  On social media total strangers feel they have the right to tell you you're beautiful, or ugly, and that your opinion doesn't matter.  If you challenge them the abuse is always personal, often violent, and of a sexual nature.  Yet social media has given women a voice to unite and fight back. A read through of the Everyday Sexism Project's Twitter feed or website shows you what us women have to put up with on a daily basis, but through Twitter and the like, we can shout back and we can call out male privilege.

Why am I writing all this?  Well earlier this week I had an unwanted encounter and it's made me angry.  If you're a woman and you use social media you unfortunately get desensitised to the unwanted friend requests and pornographic images you get sent, but foolishly I thought LinkedIn was a place for professionals.  It started with a message saying "Hey, how are you?" as so many messages do.  This being a platform for networking and building your business I said hello back, figuring we had mutual connections or maybe he was interested in working with me or liked what I wrote, and thought nothing of it.  When I woke up, this guy had sent me a message telling me I was beautiful and we could talk if I liked.  Then, without waiting for a response (I guess because why would a woman say no?) he sent me what he called a poem for all the beautiful women. 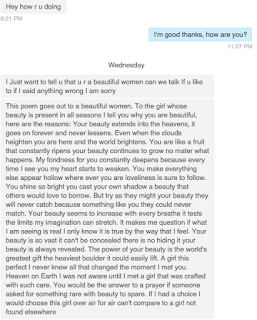 Now I'm not going to lie, I sent him a message that wasn't sweary but was full of anger and disbelief.  I asked him why he felt the need to send unsolicited messages to professional women he doesn't know to tell them he thinks they are attractive, and whether he sent such "poems" to beautiful men. Unfortunately, because I reported him my response is nowhere to be seen, which is a shame because I put a lot of thought into how to explain about male privilege, that women are not there for his entertainment and having some creepy man we don't know tell us we're beautiful isn't going to make us feel better about ourselves. 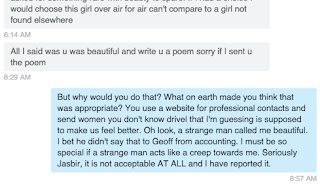 Well anyway, he got all hurt because I didn't appreciate his unwanted and inappropriate rubbish - by all means read it if you want to, I managed to get a screen shot of it - and sent me a whiney response.  As you can see, I responded again when normally I would just ignore such things, but I wanted him to try to understand why that sort of behaviour is unacceptable. I realise I am probably wasting my time but I feel weakened if I turn the other cheek and ignore it, and I truly believe such behaviour must be challenged if you feel safe to do so.

Maybe he genuinely didn't realise that he was behaving inappropriately; maybe he thought LinkedIn was some sort of dating site.  Either way, my inner Crone feels much better for encouraging me to shout my power and outrage from the rooftops.  The thing is, I know not all men behave the way this guy did, but not enough challenge it, so I say to all the guys reading this, if you see someone - a friend, a colleague - acting inappropriately, be the guy strong enough to say something.  Not because women are weak and need a man to defend them, but because you know right from wrong and you refuse to allow bullying and intimidation to go on in your presence.


Until next time everyone,