Angels in Witchcraft and other Spiritual Paths

As you may or may not know, the radio show I co-host is on a station called Angelic Realms Radio, and this week we were discussing when and why the angels were created.  If you want to you can listen to the show in archive here so you can get Dax's and Pamela's takes on this subject as well.

Now for those of you that don't know, angels don't feature in witchcraft.  We honour the Divine Feminine and the Divine Masculine, maybe we invoke various gods and goddesses to aid us in our practices, and certainly we see all of nature as sacred, but this means we have no place for angels.  A witch has a direct connection to the divine energies, making us divine beings as well of course, so we have no need for an intermediary to intervene on our behalf.  Therefore it is fair to say I don't believe in angels. However, they are a fascinating topic so I think at this point I shall identify the different ways other spiritual paths see angels, but I also want to point out that I am not a religious student and if I make a mistake in my attempt to simplify and summarise a religion's position I do not mean any offence by it.

I'm going to start with the earliest evidence I could find at least, which is in Zoroastrianism.  This is one of the oldest monotheisms in the world and dates from around 3500 years ago.  According to the BBC Religion website the prophet Zoroaster had a vision where he was in the presence of five Amesha Spentas, or Holy Immortals.  They are seen as extensions of the god and each one has certain attributes.  Though they are often equated to angels they are also seen as attainable states that can be reached through worship.

The obvious example when talking about angels in Western culture is Christianity and its precursor Judaism.  On this path a single god created the universe, the solar system, the planet and everything on it.  Angels were created to act as a messenger between the god and humans, because the god is too divine and human experience cannot conceive actual direct contact with the deity.  Although angels were created as messengers they have free will and can disobey the god, hence the concept of fallen angels.  They can also pass messages back to the god and therefore can pass on prayers for people hoping for the god's intervention. 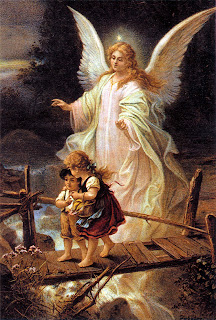 Islam, sharing many of the same holy texts as Christianity, also features angels but the big difference is they do not have free will and only obey the god. This means there are no fallen angels and they cannot act on behalf of humans.  Believing in angels is one of the six Articles of Faith.

After that it gets a bit vague.  Sikhism, for example, doesn't feature angels as part of the worship of the god, but the sacred texts do mention Azrael, the angel of death, and Chitar and Gupat who record the conscious and unconscious thoughts and actions so your life can be judged prior to reincarnation.  Hinduism, which is closely associated with Sikhism and Buddhism, makes no reference to angels that I can find.  Buddhists, of course, have no belief in a personal god and instead focus on attaining enlightenment through meditation, wisdom and living by example, so they have no concept similar to angels in their faith.

The ancient Romans, before Christianity was adopted as the main religion, believed that they had spiritual guardians.  Men had a genius, women a juno, and they protected you and helped you find success, but they were your own personal spirit, and could be an ancestral spirit, so they don't really fit the description of angel or messenger.  Similarly the Greeks believed in spirits that could help them by providing answers and guidance through dreams, intuition and signs such as coincidences.  Again, this doesn't really fit the description of an angel as intermediary between the deity and the faithful.

So if angels only seem to appear in monotheistic religions, do they even exist?  I can only give my opinion on this - greater minds than mine have argued this for centuries - but in order to answer I must ask your patience. As a witch I have worked with the Universal Divine and energies for decades.  I have honoured my ancestors as well as gods and goddesses, and sometimes I have simply honoured myself or the planet.  I also recognise that there are some things I do not yet understand, because I can only operate within this physical dimension unless I am in meditation, so I am limited by my ability to express in words what I sense to be true. 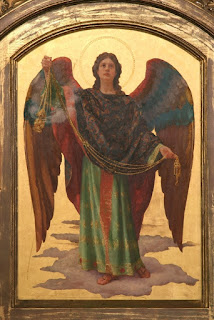 If I ask you to picture an angel, most people will probably see a beautiful winged being glowing with holy light. These creatures do not exist.  They are a human construct, just as the word "angel" is, and therefore they do not exist outside of human imagination. However, there is a higher level of energetic vibration that we can access through meditation, for example, and it is this that I believe gave our ancestors the inspiration for angels.  There is a higher level of consciousness, a greater energy, and it is waiting to work with us.  It is this energy that we work with when we meditate, cast spells, perform rituals, pray, or whatever you do to connect with this Universal Divine.  We create and shape the world around us to make it easier to understand, and therefore it is through Christianity, the dominant religion of the Western world, that we get the word and concept of angels.

The truth is on my path I'm not sure what to call these beings, I just know that I reject the concept of angel as messenger of God because I am directly connected already and don't need a middle man.  However there is an energy out there beyond my understanding, and it is through this that I get my dreams, my precognition and my divinations.

Until next time everyone,