In Memory of Sir Terry Pratchett

It is with a very sad heart that I am writing this blog post, so forgive the lack of my usual merry meet greeting.  A week ago today, on 12th March 2015, the world lost a great man.  In fact two worlds lost a great man.


Sir Terry Pratchett OBE was the creator of the Discworld, a fantastic world on the edge of reality that sat upon the backs of four elephants which in turn rode on the back of a giant turtle.  It is a world populated by witches and wizards, yes, but also blacksmiths, shepherdesses, teachers, ambassadors, seamstresses with not a single needle to their name and dodgy pie sellers who will cut their own throat to get you a deal.  It is no exaggeration to say he was the second biggest influence on my growing up and deciding on the kind of person I wanted to be; only my mum had a bigger influence.

He died aged just 66 from a rare form of early onset altzeimer's, Posterior Cortical Atrophy, that affected the back of his brain.  It didn't stop him from writing; instead he started using dictation software, though he admitted that having to teach it Ankh-Morpork, Weatherwax and so on was a frustrating task.  After coming out about his disease he became a fierce campaigner, not just for research into altzeimer's and better support for victims and families but also into assisted death.  Always one to stand up for what he believed in he donated $1m to altzeimer's research in March 2008, and made a documentary about assisted death for the BBC.

I was first introduced to the Discworld back in 1989 at the impressionable age of 15 by my friend Miranda.  I was struggling to read Macbeth for my GCSE English so she leant me "Wyrd Sisters" with an explanation along the lines of "Our world leaks through; they're very similar."

I dutifully took it home and read it and found I really liked his writing style.  I kept breaking out in fits of laughter, so much so Dad grounded me for a week for laughing while he was trying to watch the news.  On the second day I finished the book and suggested Dad read it because I thought he'd like it and I wanted him to understand I hadn't been ruining the news deliberately.  On day three Dad, with tears rolling down his face and a bellyache from laughing, lifted my grounding on the basis that it wasn't my fault.  Often when people say they had a difficult relationship with someone it is a euphemism for something much worse.  I had a difficult relationship with my dad in those days, but the one thing we had in common was the Disc, and for that I am still grateful.

I sometimes wonder if I would be the witch I am today if it hadn't been for Granny Weatherwax, Nanny Ogg and Magrat in that first book.  Sir Terry wrote about witches, and women in general actually, as the incredibly strong and above all human characters we all are.  Visualise the witches in Macbeth.  They are the epitome of evil; from the "Bubble, bubble, toil and trouble" to the cackling and the warts you just know they're up to no good. "Wyrd Sisters" also starts with three witches huddled around a cauldron on a storm lashed hillside.  I will let Terry introduce them.

"In the middle of this elemental storm a fire gleamed among the dripping furze bushes like the madness in a weasel's eye.  It illuminated three hunched figures.  As the cauldron bubbled an eldritch voice shrieked: 'When shall we three meet again?'

There was a pause.

Finally another voice said, in far more ordinary tones: 'Well, I can do next Tuesday.'

...'I'm babysitting on Tuesday,' said the one with no hat but a thatch of white curls so thick she might have been wearing a helmet.  'For our Jason's youngest.  I can manage Friday.  Hurry up with the tea, luv.  I'm that parched.'

The junior member of the trio gave a sigh, and ladled some boiling water out of the cauldron and into the teapot."

Here we see witches not as beautiful temptresses or warty old hags, but as women for whom being a witch is a way of life.  You roll your sleeves up and get your hands dirty.  They know that much of being a witch isn't about the dribbly candles and occult symbols, it's about sitting up all night with the sick, standing up for what is right, and above all being yourself just as hard as you can.


It wasn't just the witches that influenced me.  Sam Vimes of the City Watch taught me to find the questions nobody was asking.  Magrat (she of the tea making in the extract above) taught me that though I am quiet and a bit of a wet hen, there is also a fire that rages inside of me for when I need it. Angua, Cheery and Detritus reminded me not to judge people based on appearances and perceptions.  The Patrician of Ankh-Morpork, Lord Vetinari, taught me never to trust mimes, though admittedly that one doesn't come up so much.  Ankh-Morpork is the biggest city on the Disc and at one point I knew it's streets as well as I knew my own village.

The Discworld was a place to escape to in good times and bad.  It was my second home, and while my heart is breaking for Sir Terry's wife, daughter and friends, it is also breaking because I know that the door to the Disc will open just one more time.  Last summer he finished the fifth Tiffany Aching book, a Discworld series about a young witch growing up.  They are a young adult series, but in a world where he was Britain's best selling author right up until some woman called J. K. Rowling wrote a series about a boy wizard I don't see that as a bad thing, and certainly his writing style doesn't significantly change and he doesn't shy away from long words.

I met him once, at a book signing in Winchester.  He was just as awesome as I'd hoped; charming, funny, polite despite the number of people he'd already signed for, and with a fierce intelligence that radiated out of him. I'm not ashamed to say I geeked out, and in my attempt to be cool and nonchalant made a total tit out of myself by grinning like an idiot and giggling like a child.  Ah well; you win some, you lose some.

In amongst the tears, however, there is joy.  The doors to the Discworld will always be open for me to relive the adventures, and there is that one last book to come.  I bought one of his children's books for one of my nephews last Christmas, and I got my dad a spin-off book, so the family love continues and will hopefully grow as the next generation learns to read.

Perhaps the greatest praise I can give is that his books have been my constant companion for the last twenty five years; through university, break ups, new jobs and marriage, the characters of the Discworld have kept me company and kept me sane in a very real way.  Despite his massive sales, he was consistently seen as cult and a bit niche because he was lumped in the fantasy genre, but like all good authors what he wrote about was us.

It was his funeral yesterday, Humanist as you would expect from him, and so it is time I raise a non-metallic thimble of scumble or possibly re-annual wine and say thank you pTerry*, thank you from the bottom of my heart and my bookcase. 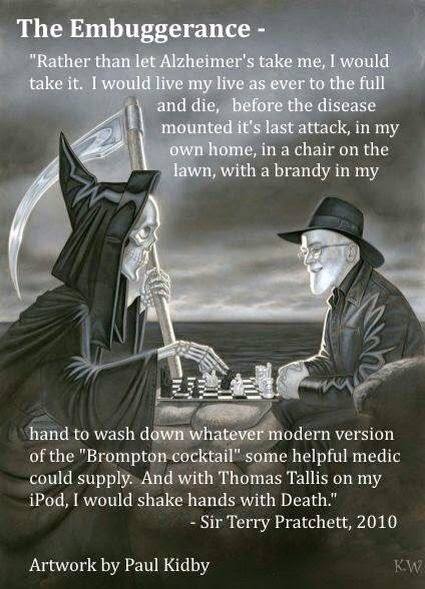 *Any article about Terry Pratchett and the Discworld is incomplete without a footnote.  If you want to know why fans call him pTerry I suggest you read his book "Pyramids" and all will be revealed...
Posted by Susanne at 14:44