Colchester Castle and the story of Boudicca

Merry meet one and all.

My parents came for a visit at the weekend, and one of the things we did was visit Colchester Castle.  I've wanted to visit for many years, long before I lived near by, because I've always been fascinated by the story of Boudicca and her ties to what is now the castle.  Later, as a witch, I learnt that many women were held there as part of the witch trials of the post-civil war period, but that's for another post.

Boudicca is highly celebrated here in England, and her image has been used as a symbol of hope and defiance for generations.  She has been intertwined with the image of Britannia and has represented equality for all (despite being highly privileged herself), female emancipation, even Tory Britain of the 1980s, but possibly her most famous - if highly inaccurate - image is that of the bronze statue "Boadicea and her Daughters" by Thomas Thorneycroft that stands in the shadow of Big Ben on London's Embankment. 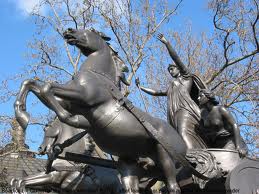 This image bears no relation to the real Boudicca, and says nothing about her part in our history.  In a nutshell, she was the wife of Prastagus, a "client king" allowed to keep his lands in East Anglia by the Roman emperor Nero in exchange for their compliance and help; basically, in order to keep his land and status he did a deal with the enemy.  Upon his death in AD60, he left half his estate to his children and half to Nero.  However Nero failed to recognise the will and claimed all the land himself, resulting in a bloody revolt.  Boudicca was able to rally her tribe, the Iceni, in protest, which was brutally quashed.  Legend has it Boudicca was flogged in front of her people and her daughters raped a number of times.  After the troops left, Boudicca led her people and the neighbouring Trinovantes to Camulodunum, what is now Colchester. At the time it was the capital of Roman England, but it had been the civic heart of the Trinovantes' land, so it was a natural target.  The city itself was largely unprotected; a garrison was still stationed there, but the majority of the Roman army was in Wales battling the Druids in Anglesey, so it was a soft yet important target.  The largely civilian Romans never stood a chance against the tens of thousands of angry, oppressed locals.  Realising they were outnumbered, and with military aid nowhere to be seen, the survivors fled to the massive stone Temple of Claudius.  With its thick stone walls and solid metal doors, it was the safest place to barricade yourself in while waiting for reinforcements.  Reinforcements that never arrived.  We can only imagine the fear of the hundreds of men, women and children inside as they listened for two whole days to the sounds of the Britons scaling the walls, and tearing the tiles off the roof to get to the enemy inside.

It is estimated that ten thousand people died in the attack on Camulodunum.  Anything that couldn't be looted was destroyed, and the town was burnt to the ground; developers today still have to go through the black layer of charred earth caused by Boudicca and her followers.

So what, I hear you ask, does all this have to do with my tourist session at the castle?  Well, following the Norman invasion of 1066, William the Conqueror set about building castles on a major scale.  It was as a part of this plan that Colchester castle was built, and they used the foundations of the ruined Temple of Claudius as a foundation for the castle; you can go on a guided tour and visit this oldest and bloodiest part of the structure.  Certainly the location and layout of the town and castle area allow you to imagine the thousands and thousands of enraged Britons pouring up the hill to seek vengeance.